It’s been a few weeks since a write up and I’d love to blame a busy schedule or some other major distraction but the truth is I’m having writers block. The fact I call myself writer and indeed attribute myself the word block is an insult to writers so we’ll go with scribblers hurdle. 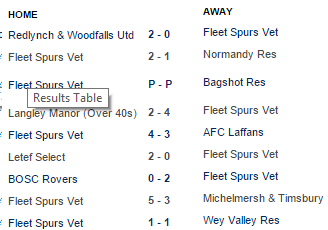 Whilst I’ve been having a brain dump, the Vets have been marching ever forward. 5 wins out of 6 games going into a cup quarter final in the badlands of Salisbury.

Proving that form means nothing we lost 2-0 in a blowing gale on an uphill pitch which surely challenged last season’s Kennels Lane for ‘best meadow’. Credit where due they were real Vets, they played good football and thoroughly deserved the win and a jolly nice bunch they were too. Our chances were limited to losing 2 balls over the 20ft high fence and whilst they didn’t create a huge number they were the better team.

In similar weather the previous week we came up against old foes Normandy in a league match. They’ve always put on a good challenge and after spanking us last season it was time to get some pride back. We did so whilst watching them implode. Without diving too deep into the detail, Colin scored from 40 yards with a free kick that did their keeper in the wind. They equalized with a through ball and lob but it didn’t last. After chasing down their keeper he appeared to lose his temper from being pressured on the kick from hands and promptly kicked it into his own on rushing chest puffing player….Ethers sweeping up the knock down and making it 2-1. Their midfield dynamo and arguably their best player seemed to take umbridge at that and a few choice comments and promptly swung at the Erasure front man in our midfield. Off he went. He came back on later to chase the ref and threaten as many people as he could. Understandably disturbed at losing there were some post match chats before one highlight of ‘I’m going to take down my shed and beat you with the planks’. I’m not sure if he was taking his shed down anyway or whether he just saw it as an opportunity to clean the garden up, either way the return fixture doesn’t look pleasant.

A week before the only real highlight was a certain author copping a strop for being subbed and having to run the line in an arctic storm whilst we won away in Southampton.

Normal service may be resumed next week. By which I mean we will either start losing ‘really close run games’ or I’ll start writing something funny, which will it be?