The words of the sane population on this planet but for a select few hardy souls it’s something that needs to be attempted. There are be two schools of thought, either you’re an idiot or you’re awesome. I think I’m an awesome idiot.

The weekend started with a miserable drive down to Weymouth, gear all packed, separated into bags for the different disciplines and ready to rock. Having read the pack a few times we knew we had to register then drop the bikes off along with everything except the swim gear. We parked up by the transition and got told to go and register at the Pavillion..a 3 mile round trip walk before coming back to drop the bikes in. Pouring rain, plans to relax out the window. By the time we’d done the registration, walked back, sorted the bikes and gear, moved the car, checked into the hotel and done the briefing it was 7pm, time for a light dinner and some panic. Whilst I dived into some tomato pasta, Rix dived into veal pasta with a side of mash. I think he may have asked for foie gras and some Black Tower but quite frankly my stomach was doing cartwheels so I wasn’t listening. The weather broke and the stars were beginning to align. Flat seas.

Flat seas and a smile of forced lunacy

A restless night followed by a 4am alarm saw me necking two Weetabix liquid breakfasts and a chocolate wafer, before ensuring the net intake was put back into the red by doing my best impression of the Japanese flag in the bathroom. Rix politely said nothing but I’m pretty sure he was applying moisturizer to his body to prevent the toilet napalm from stripping his skin. 20 minutes later and we hit the reception area because the Earl couldn’t start his day without a cuppa and then another visit to the loo to make weight.

A quick walk with many hoodied athletes in an eerie predawn silence led us up to the transition area, a last minute check on the bike and donning a wetsuit.

Three times I put my wetsuit on, each time forgetting something, heart monitor, vaseline, watch. Nerves? I was shaking more than Ronald McDonald when mad cow disease broke out.

Finally off to the beach for the start.  Rix needed a wee, so we stopped. Once done he forgot to take his non waterproof watch off. All sorted we both dawdled around looking to drop off our bags of clothes. Shall we not bother with the beach? Let’s just call it a day there and say we tried.

The swim start is self seeding, you pick a time and get in line….get in line on the cold sharp shingle with 3000 nervous neoprene clad awesome idiots. Whilst the sunrise over the cliffs was stunning and the water was remarkably flat there was still a sense of nervous excrement (no, that’s not a typo). The national anthem played, the pro’s went off…and eventually we started moving. A sense of inevitable.  Closer to the start we disposed of my trainers and Rix’s new crocs, a small price to pay for warm toes. I like to think somewhere the homeless guys got a new pair of shoes. I also like to think the guy that got my decent Saucony runners is a damn sight happier than the guy that got a pair of size 47 crocs that have sheltered a gammy toe for the last 4 weeks.

The breakdown – hit the links if you want the data.

I seeded with Rix at 1:40. Once in the water I found a rhythm and the strokes eased by. Crystal clear and a calm seasmade it almost pleasurable. A few kicks early on but certainly no washing machine. I should have counted the buoys though as upon reaching the first I thought I had it nailed and had nothing to worry about….it was a marker, less than a third of the way up the out stretch. Fairly disheartening, but a quick wee to warm up and head down. I tried to draft but most people at my level swim about as straight as Elton John. 2 turns later, 1 lap done, 1.2 miles in 41 minutes.

I tried to concentrate on looking calm as I ran out, the crowds cheered in awe as I emerged from the surf. Baywatch played and I tripped over the underwear being flung at me. The reality….I stumbled from the water, flailing across the stones, snot running down my face and to those close enough probably smelling slightly of wee. Straight back in for lap 2. Keeping pace with those around me was proving relatively easy, keep the pattern, stroke-stroke-breath-stroke-cough-fart-laugh-cough-cough-breath-have a wee. Classic form. Who is that man splashing with the efficiency of a tractor and the exhaust to match. I eventually found someone ever so slightly faster than me  who had his legs going like fitting giraffe. Following the bubbles and tapping his feet now and then (sorry) kept me on track.

Lap 2 – 44 minutes and over took loads of people. Loved it. A quick flush of the wetsuit before standing up to wash it out and a run to transition.

I might as well have had a cup of tea and a bit of dinner. God knows what I was doing for 11 minutes, but I don’t recall it being stressful!

The goal on the bike was hit my numbers, I’d planned my times for the feed stations and key mileages and I was happily on track with room to spare on the first lap. Second lap was a different story. I’d built myself up to see my family at the beginning of the second lap, I’ve no idea why it meant so much at the time and I absolutely knew they would likely not be there, logistically it was almost impossible that they’d get there. I was devastated, I’m glad I had dark shades on is all I will say and it wasn’t wee that was dribbling off my bike frame for once. It was all I could do to turn into the second lap rather than ride it home. I still hit the feed station on track but my Garmin started telling me I was hitting 230bpm which filled me with dread. I’ve had arrhythmia before and the dark times were telling me I was going to drop dead (more quivering lips) on the course if I didn’t back off. So I did. I’m sure it was a faulty HRM strap but I couldn’t risk it. The last few miles were horrible, mainly hills and without exception everyone that came past or that I passed said the same thing and it wasn’t ‘Isn’t this fun?’.

I should add, one guy came past me, Shaun (London Pride Tri suit) and he made it all feel a bit more normal. No motivational chats, no keep going fella stuff. Just good old fashioned ‘f*#k this’ and a normal chat about how crap it was. I needed it and watching him pull away as I nursed my racing pulse was hard work. Pulling into T2 screams from the kids and my other half revitalised me, I had no idea they’d be there and it flipped my mood again. I’d secretly hoped I’d miss the cut off, at the same time as not wanting to. Doesn’t make sense I know, but my brain was fried.

A bit of talc, some chat in the nude tent and a comedy moment when someone stood up on the bench I was sat on….my end went down like a see saw and woke me up.

Coming out of transition a quick hug with the family and I told my better half I wasn’t going to do it. I was over. I needed to say it so it wouldn’t be a surprise. I lumbered off to do 5k then quit. Running brought on a stitch that made me yelp so I walked for a bit and worked out how I was going to justify failing. I figured Rix was 2 hours ahead somewhere so I’d pass him on the loop at some point then I’d call it a day. I kept plodding and managed the lap. I caught Shaun and which kept me going then started to power walk/jog sections. With every lap I could hear the announcer telling the crowd about another hero crossing the line..a few more miles and it would be me….but my body said otherwise. I told my other half again as we passed at mile 15, there was no way I was going to finish.

The crowd were nothing short of magnificent, shouts and motivation from everyone old and young. This pair were there all night until my last lap when I finally managed to utter a word of thanks.

When I finally turned the last corner it was surreal. A quick motivation from the gravel voiced motivator that had been hiding on the dark corner by the finish chute all night (special thanks to him – absolute top man) and a run up the line. I grinned like a broken idiot as the announcer shouted the immortal words. I am an Ironman. I couldn’t tell you what else was said. 140.6 miles and 16 hours.

I can tell you the medical staff were exceptional and the immediate adrenalin crash, shakes and dizziness were picked up on and they sorted me out. Thank you! One emergency stopover in a hotel because it was too late to head home and the absolute heroics of Richard to pick up my bike for me whilst I drank tea and garbled gibberish at the medics saw the day out.

I AM AN IRONMAN

Rocking an Axians Velo top, I’m all about the freebies!

About 5 minutes before I hung out in the medical tent. 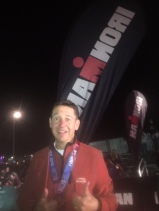 Rix, not a dent on him 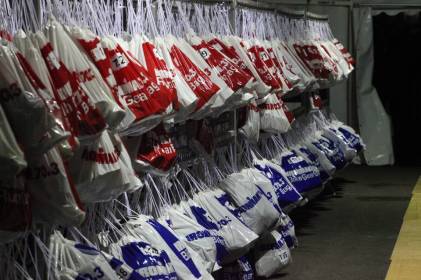 Transition, grab a bag, put your sweaty gruds in it, let it fester for a day in the car and then try not to retch when you wash it.

Austen giving me a reason to carry on