It turns out the best sessions are the ones you don’t plan. After a weekend of Whisky and old friends I had it in my head that Monday was still a rest day. Turns out Ironman candidates don’t rest.

My friend and reason for this whole debacle, we’ll call him ‘the Duke’, has gone and booked himself in a half iron this coming weekend, so figured he should probably get some open water training in. Despite my ‘it’s raining’, ‘what about thunder storms’, ‘I need to get back for my dinner’ excuses I couldn’t let him down so I turned up.

Stretching taken care of by slipping on the decking it wasn’t long before I was unwrapping the wetsuit to see if it had lasted the winter. Some kindly gent in the changing room took pity and told me the plastic bag trick. For those that don’t know, a plastic bag on the foot makes putting on the wetsuit a piece of proverbial.

And yes, that’s the Duke behind me. Constantly happy and bouncy. Very disturbing. He’s either celebrating my fat harris getting into the neoprene fatsuit or he’s recoiling because I haven’t done the zip up yet.

Into the lake and whilst initially chilly it was actually alright, helped by a piece of the proverbial. 300m and I realised that there’s a reason you warm up. Same in running, same in cycling, I’m just too stupid to realise it. Once I’m warm I can function, until then it’s hell. Hell in a lake isn’t as easy to tolerate as hell on the street. At least running/riding you can slow down. Sinking for a rest isn’t great and floating on your back in the middle of a lap makes you look like a plank.

1900m later, all done and I could have done more. Felt good, rhythm found and the joys of open water rediscovered. All helped by a fantastically friendly bunch down at Sandhurst Open Water. 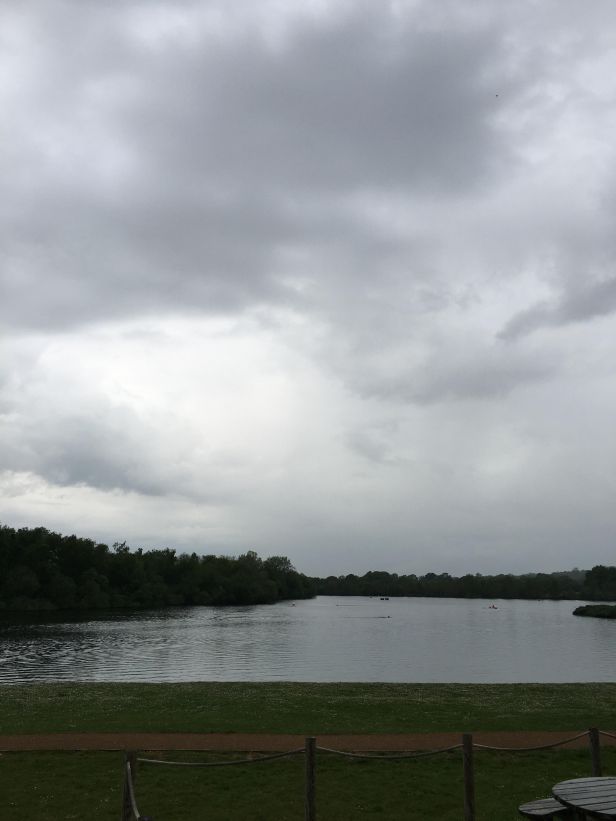