First race of the season, a new start and a step on the road to Ironman glory in Weymouth later this year.

I should have taken heed of the signs really. My preparation had gone pretty well, I’d done a fair bit of low mileage running and after a few strange aches and pains had gone to get my gait checked and a pair of trainers that worked. Thank you Alton Sports in Farnham for patiently dealing with this particular clown, who turned up in jeans and had to jog around with trousers rolled up like a crap Robinson Crusoe in fancy trainers. 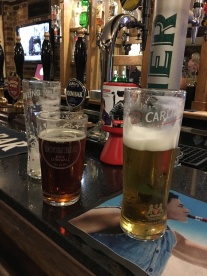 Add to that the new bike shoes, transferring my spd’s to the road bike and some new tri bars  and I was ready to rock.

I compromised my desires and settled for a lower alcohol lager for pre-race hydration. Watching Spurs snatch a marvellous victory in the pub was surely a great omen. Feeling slightly guilty I carb loaded on a lovely Indian takeaway just to keep my calorie intake up.

The stars all aligned, car loaded, indigestion passed, this was now a great chance to lay down a good benchmark to see what I needed to work on.

An early start saw me let the dogs out, feed them and wolf down a banana and a muller rice. I’m glad I ate before I went to get the dogs back in. I’m not sure the waft of fresh dogs eggs is an appetizing odour.

Lesson #1 –  Look where you’re going. Don’t go outside in the dark, you’ll stand in dog poo…in your new trainers. Spending 10 minutes picking it out of the grooves on your shiny new sneakers isn’t the start you want.

As we queued to register I turned to hang my bike up and my back went into spasm. The last time it happened it was fairly terminal in terms of movement. You can enjoy that experience here, so I won’t repeat it but suffice to say I was struggling. The physio on site stretched me out a bit but my main thought was;

‘The Ironman is going to hurt, try the run, see how you go, toughen up princess‘. My body disagreed and it’s on a scale of 1 to ‘stubbing your little toe on a sofa leg’, this came in at ‘standing on a lego brick at 4 in the morning with a red wine hangover’ turned up to about 11.

Lesson #2 – At your age. Don’t stretch, twist or otherwise move when you aren’t warmed up, you’re over 40 and things don’t work as well as they should, and dammit go and see the chiropractor that you’ve been putting off for 12 months.

Ultimately the run wasn’t too bad. Yes it hurt, but I got through it. The next thoughts were to do one lap on the bike and see how it goes. Having that focus led me to forget to restart my watch.

The bike went pretty well for 12km, the rude awakening in the quads had passed, my back had eased a little from being rested and was thinking I could get this done. I was upright rather than on the drops, but was keeping above 16mph which was the target. What I hadn’t accounted for was the spoils of winter foliage on the track. Lap 3 and getting into a groove and the tell tale bumpy feeling of a puncture soon brought me back down to earth.

Lesson #4 – Luck is transient. Just because you’ve never had a puncture doesn’t mean you shouldn’t bother taking a puncture kit. You’re guaranteed to puncture, suck it up and learn how to change fast.

I didn’t have a kit, I had, selfishly thought that if I punctured I’d dnf. It was too short a race to worry about that kind of thing. What I should have done is changed it, ignored the time and got on with it. I watched the other guys finish and did the honorable thing of clapping whilst they picked up their medals but like a tramp next to a winter motorway, it was through gritted teeth.

The sat nav in my car (Infiniti – you should be ashamed) is random. It redirects you to wherever it feels like and has yet to take me anywhere the most direct way. It’s got to the point I put it on just to ignore it as I think I know I better.

It now feels like I’ve got unfinished business. The next one is the same venue in 1 month. I’ll practice changing a tyre and get on with it. I’d rather get all the bad things out the way now.